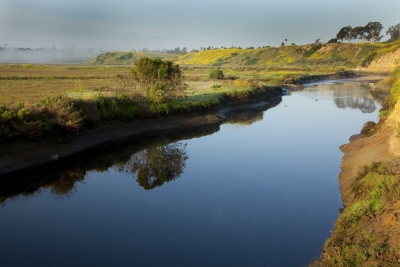 Upper Newport Bay Nature Preserve totals approximately 135 acres. The Nature Preserve is made up of the bluffs surrounding the Bay. Three sensitive species use the bluffs: The California Gnatcatcher, San Diego Cactus Wren, and Burrowing Owl. Two important plant communities are found on the bluffs – grasslands and coastal sage scrub. Upper Newport Ecological Reserve totals 752 acres. This coastal wetland, one of the largest in southern California , is renowned as one of the finest bird watching sites in North America. During winter migration up to 35,000 birds may be using the Bay at one time. It is home to six rare or endangered species: Light Footed Clapper Rail, Brown Pelican, Belding’s Savannah Sparrow, Black Rail, Peregrine Falcon and California Least Tern. The Bay is home to one endangered plant species – Saltmarsh Bird’s Beak. Considered a “critical estuary” habitat – Upper Newport Bay is one of the most pristine remaining estuaries in Southern California.

The wetlands are a critical component of IRWD’s Natural Treatment System, as they naturally clean urban runoff from San Diego Creek and help to protect the environmentally sensitive Upper Newport Bay. After interacting with the bulrush and other plants for seven to ten days, up to 70 percent of the nitrogen is removed. The cleaner water is returned to the creek to continue its journey to Upper Newport Bay and the ocean.The IRWD San Joaquin Marsh & Wildlife Sanctuary is a true hidden gem located in the heart of busy Orange County. The marsh encompasses over 300 acres of coastal freshwater wetlands, half of which have been restored to a natural state. The remaining acres are quality habitat and are not in need of restoration. Nearly two-thirds the size of New York City’s Central Park, the San Joaquin Marsh & Wildlife Sanctuary has become one of Southern California’s most notable nature respites.

No upcoming events at this location. Check the Events Calendar for events at other locations