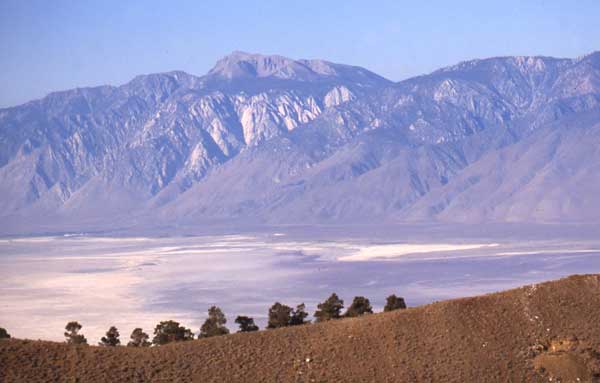 An enormous wildlife resource has returned to Owens Lake, once a migration stopover for tens of thousands of shorebirds and waterfowl that was lost nearly 100 years ago. The lake was dried as a result of water gathering by the City of Los Angeles, but now is receiving careful application of water by LADWP to control the regional dust storms born with the lake’s death. Roughly 40 square miles of Owens Lake playa are covered with shallow ponds or sheet flooding resulting in thousands of acres of rich feeding habitat for sandpipers, Snowy Plovers, ducks, and geese.

In 2001 Bird Life International designated Owens Lake a nationally significant Important Bird Area (IBA.) Creation of a collaborative lake-wide conservation action plan was begun by Eastern Sierra Audubon and Audubon CA in partnership with LADWP, Department of Fish and Game and the State Lands Commission. This process has grown into a larger effort to design an Owens Lake ‘Master Plan’ that would seek to save water for the City of Los Angeles in return for large tracts of designated habitat for shorebirds and waterfowl. Today birders and wildlife watchers are visiting the lake on guided field trips to see this amazing migratory spectacle. Snowy Plovers (the largest inland nesting site in California), large flocks of Least and Western Sandpipers, thousands of American Avocets, Peregrine Falcon, White-faced Ibis, and more are all observed on tours of the lake. Now the challenge is to determine how much of this rare resource can be protected in perpetuity. Can a balance be found between the need for water by Los Angeles and need to protect wildlife for the citizens of California?

Mike Prather has been residing in Inyo County since 1972 when he and wife Nancy moved to Death Valley to teach in a one room school house. Mike has been actively working on land and water issues in the Owens Valley since 1980 with the Owens Valley Committee (past president), Eastern Sierra Audubon (past president) and Sierra Club (past chapter chair). The re-watering of 62 miles of the Lower Owens River and the massive wildlife return to Owens Lake as a result of the Los Angeles Owens Lake Dust Control Project have been the center of Mike’s conservation focus since the early 1980s. The enhancement and protection of the Owens River and Owens Lake IBAs attract most of his current efforts and he invites everyone to join in the fun.

See the Calendar for directions to this meeting on October 28, 2010.