While the Sepulveda Basin is a winter home to many species of migratory birds, the largest of these by far is the American White Pelican. Traveling in squadrons and weighing up to 30 pounds with 9 foot wingspans, they are among our largest boreal flying birds. Their breeding grounds extend as far north as central Canada. From mid-autumn to mid-spring these magnificent birds may be seen in the Los Angeles River and the man-made lakes in the Sepulveda Basin, as well as soaring and circling over one of the busiest freeway interchanges (405-101) in the United States. They often form circular groups to herd and capture fish. 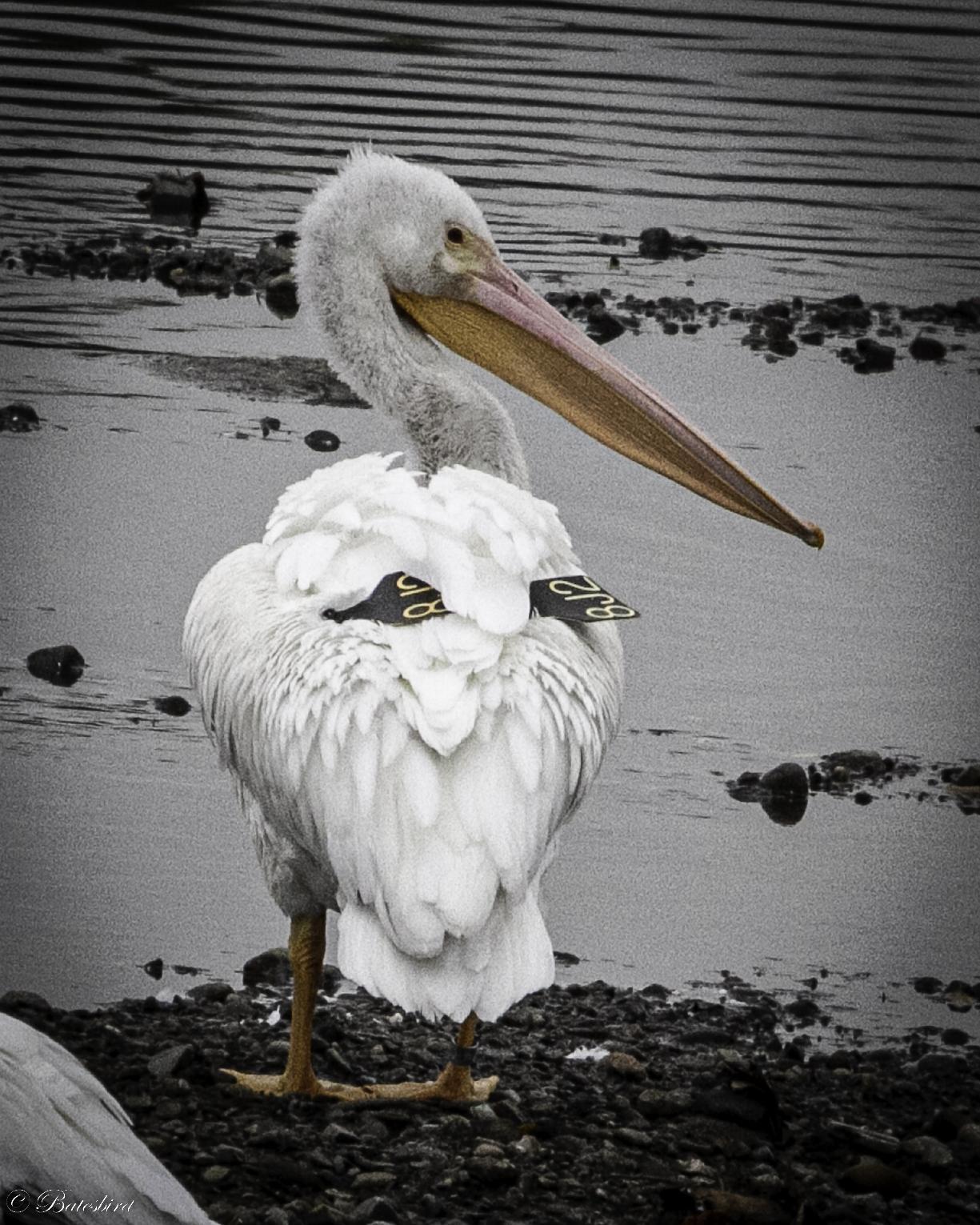 Occasionally a tagged pelican is encountered, and if the tag is readable, it is easy to obtain information on where the bird was banded. Such a pelican was recently sighted at the Los Angeles River in the Sepulveda Basin with the tags visible on the bird’s back. It is important to note the tag and lettering color as well as the code. For example, this tag was black with yellow characters. The bird also has a ring on its right leg, but that was too far away to read. Tagged or ringed birds may be reported at reportband.gov by reporting the tag data plus information on location, whether the bird was alive, etc. This is a U.S. Geological Survey and Canadian Wildlife Service program in cooperation with many agencies, organizations and individuals. Data from the program is used for purposes including monitoring bird population and migration patterns, restoring endangered species, and many other environmental studies. Note that smaller birds are typically just banded on a leg. Even then, it may be possible to get a photo which shows the information.

When a bird is reported, within a few days a certificate is emailed back indicating when and where the bird was banded. In the case of our pelican number 8J2 in the LA River – it was tagged when too young to fly near Bancroft, Idaho on July 28, 2021. This is obviously its second trip south, a distance of about 680 miles as the crow (or in this case, pelican) flies.

It is wonderful to see the American White Pelicans arriving at the Sepulveda Basin to spend the winter. They travel over some very inhospitable territory to get here, and it is crucially important to protect them from hazards in our urban environment. A major risk for the pelicans as well as other swimming and diving birds is fishing line and tackle, which cause thousands of bird deaths yearly. For this reason fishing is completely prohibited at the Sepulveda Basin Wildlife Lake, and receptacles for proper disposal of line are provided at Lake Balboa. Unfortunately we continually see cases of entangled birds and must rely on people being responsible with their fishing line and tackle as well as observing legal restrictions.

You can usually see American White Pelicans at the Sepulveda Basin Wildlife Lake from November through March – their arrival and departure dates are somewhat variable. San Fernando Valley Audubon Society (sfvaudubon.org) leads trips to the wildlife area on the first Sunday of each month at 8 am, plus a family/beginners trip on the second Saturday at 9 am (October to March). Check sfvaudubon.org for directions and more details, and join us for a trip to this most amazing wildlife area!