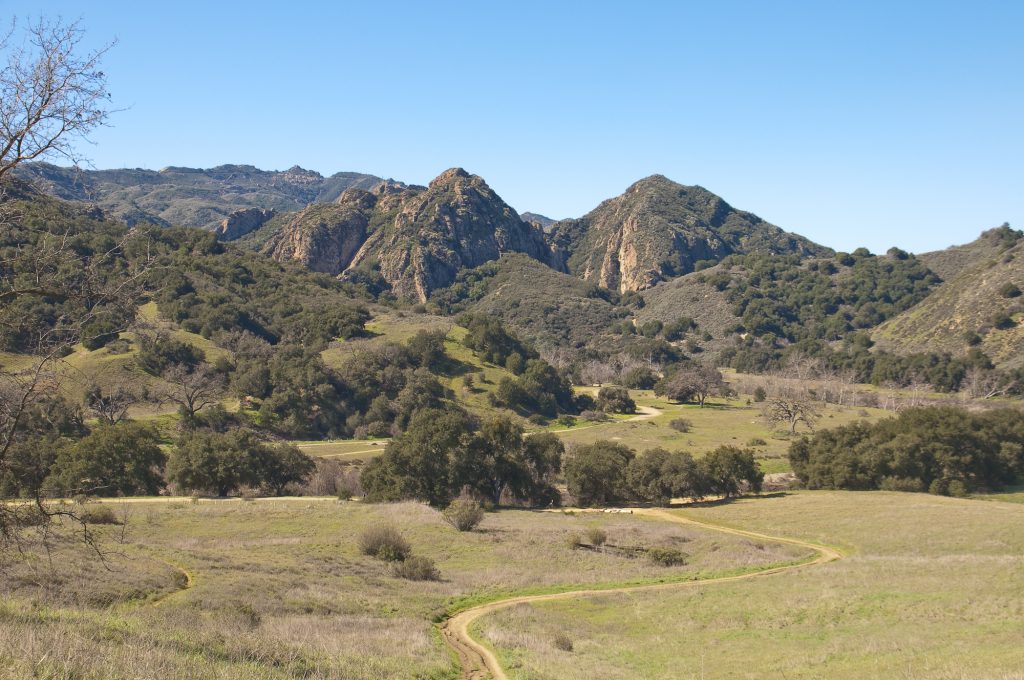 Accessibility note: There is a parking lot with handicap spaces, and the restrooms are accessible. Our normal route is not particularly easy, but might be doable with a rugged wheelchair. At least the main road is wide, although mostly dirt. However, there is a shorter route we occasionally do in the morning that goes through the campground area. If we someone in a wheelchair wants to join us — and we invite their participation — we could vary the routine and do that route to accommodate.

The land that is now Malibu Creek State Park was inhabited by native Chumash people for millennia. The site of a village called Talepop has been uncovered by archaeologists in the northeast corner of the park. The Chumash were most famous for their redwood canoes, which they used to travel the coastline for hundreds of miles. By the 1860s a few homesteads existed, including the Sepulveda Adobe, which still stands.

In 1900 a group of wealthy Los Angeles businessmen created the Crags Country Club and purchased 2,000 acres (800 ha) along Malibu Creek. In 1903 a 50-foot high (15 m) dam was built nearby, creating a 7-acre (2.8 ha) lake which was later purchased by 20th Century Fox and named Century Lake. The three-level, 7,500-square-foot (700 m2) Crags Club Lodge was completed in 1910. Redwood trees were planted near the lake that same year, and today stand as the southernmost specimens in California.[3] Also within park boundaries is the Rindge Dam in Malibu Canyon, built in 1926. The Crags Country Club ceased operations in 1936 and the lodge was torn down in 1955.

The majority of the park’s lands were donated by entertainer Bob Hope. Other parts of the park, added later, were previously owned by Paramount Pictures and 20th Century Fox for movie ranches. Part of the former 20th Century Fox Ranch had been purchased in 1966 from Ronald Reagan. The Reagan ranch, known as “Yearling Row”, was owned by the future president from 1951 to 1966 (Reagan earlier owned another ranch also called Yearling Row in Northridge, California). It was sold by the Reagans to pay campaign debts from the 1966 California governor’s campaign. Additional parcels have been connected by the Santa Monica Mountains Conservancy and Santa Monica Mountains National Recreation Area.

In 2014, adjacent Cameron Nature Preserve in Puerco Canyon was acquired by the Santa Monica Mountains Recreation and Conservation Authority. This created a contiguous block of public parkland from this park to Corral Canyon Park and will provide a path for the Coastal Slope Trail. The 703-acre property (284 ha) was purchased from Oscar-winning director James Cameron.

In 2018 substantial portions of the park, including the Reagan ranch and the Fox Ranch location for many films and television shows, were burned and destroyed by the Woolsey Fire.